Hover over the painting to magnify (there may be an initial delay while the magnified image is loaded)
£3,950
+ 100 £ shipping
Enquire
Add to cart

From 1924 Brangwyn was occupied with what he regarded as the culmination of his life’s work, a mural scheme for the Royal Gallery in the House of Lords, commissioned by Lord Iveagh as a First World War Memorial. The first scheme – which was rejected, and to which this study relates, – showed soldiers and tanks in action. The final scheme, known as The Empire Panels, were installed in Brangwyn Hall, Guildhall, Swansea in 1934. 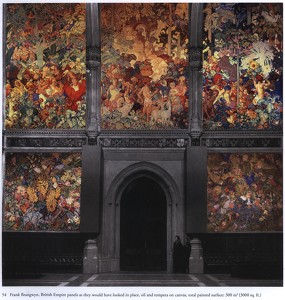 The British Empire panels were commissioned by the Earl of Iveagh to decorate the Royal Gallery in the House of Lords, Westminster. Following the death of Iveagh,  the Fine Art Commission insisted on some panels being placed temporarily in the Gallery. They rejected the work as did the House of Lords. Brangwyn completed the commission which was eventually exhibited at the Ideal Home Exhibition, Olympia. Offers for the panels were received from the USA and Japan, andBritish cities including Birmingham, Cardiff and London attempted to gain the murals.21However,  a new Guildhall was being designed forSwansea and the city persuaded Iveagh’s son and Brangwyn that the pan-els could be successfully accommodated in the main hall, now known as the Brangwyn Hall.There are over 100 studies for the British Empire panels in public galleries in the UK and Australia, the largest collection being in Swansea, at the Glynn Vivian Art Gallery and the Guildhall. Anequal number probably exists in private collections throughout the world.The British Empire panels represent a sublime mixture of Flemish verdure tapestries and natura naturens, Indonesian paintings, and WilliamMorris flora and fauna.  Humans have virtually disappeared,  hiddenbehind hallucinatory visions of foliage and wildlife infested forest.Critical reaction to the completed panels has varied from the glow-ing: ‘The most splendid unit of decorative painting executed in Europe since Tintoretto ceased his work in the Doge’s Palace at Venice’ to the airily dismissive: ‘All tits and bananas’.

Some of Brangwyn’s ﬁnest studies are those he made for the British Empire panels. He told his friend RH Kitson that he was ‘working from ﬂowers, trees, animals,and black and colored men women and children. It is very interesting more especially the animals and a grand chance for me to take up animals and landscape and do it ﬁnely. It never has really been done only a bit here and there.


We are grateful to Dr Libby Horner for assistance and for allowing us the use the images.