Hover over the painting to magnify (there may be an initial delay while the magnified image is loaded)
£11,000
Free shipping
Enquire
Add to cart

One of Brangwyn’s most important stained-glass commissions, and probably his most successful, this design for a stained-glass window was commissioned by Lady Webley-Parry-Pryse in memory of her mother, Mrs Webley-Parry, who had died on 2 September 1917. Mrs Webley-Parry had given very generously of her time and money in parish affairs. The three-light window is situated in the north aisle of the Church of St. Mary the Virgin, Bucklebury,  and shows a landscape nativity scene with Mary, Joseph and the infant Jesus in the centre, shepherds to the right and left. Behind the figures a wattle fence creates a horizontal divide over which the spectators gaze and beyond this a blue-grey landscape with sheep, cattle and Bethlehem in the distance. The stable roof appears at the top, the vertical stable supports dividing the outer lights.  The design was executed in glass by James Sylvester Sparrow. 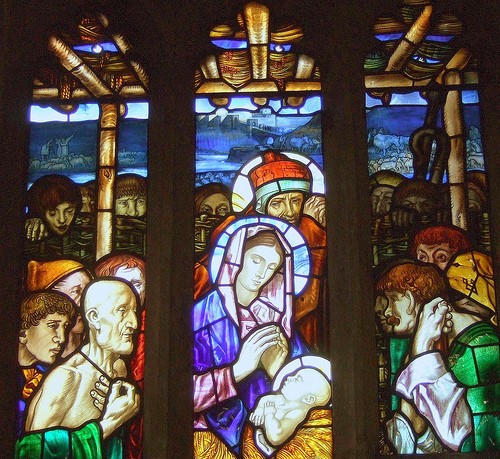 In 1924 the art historian and critic, Herbert Furst, considered the nativity window ‘perfect’, the design fitting easily into the window shape, the composition simple, ‘the drawing full of dramatic power and characterization, and the beautiful colour  scheme helps the definition.’ He also appreciated the row of spectators gazing over the fence, which he described as ‘an excellent and unusual effect, dramatically, tectonically and colouristically’. Furst continued that it was ‘futile to attempt a description; the window, like a musical composition, must be realised by direct contact with the senses. It is undoubtedly one of the finest things Brangwyn has done…’

In the early decades of the 1900s Brangwyn was one of the most revered artists in the world, his work being avidly commissioned or collected by many of the greatest public and private collections in Europe, the British Empire, Japan and the United States. He was indeed the first British artist to achieve world-wide recognition in his lifetime, and the Dictionary of National Biography was able to record that ‘His work is represented in virtually every major art gallery and print room in the world.’ Brangwyn was an extremely versatile artist and designer. In addition to his canvasses, he was also in great demand as a painter of murals for very significant public buildings in many countries, including his famous series for the Rockefeller Center in New York. He was, in fact, a complete polymath, the quintessential artist craftsman. Apart from his paintings and murals, he designed stained glass, carpets, jewellery, metalwork, pottery, posters and furniture. He was elected Royal Academician in 1919 (although he had almost nothing to do with the Academy’s affairs) and was knighted in 1941. An important exhibition of his art was opened in 1924 by the Prime Minister, the first occasion this had ever happened for an art show. In 1952, Brangwyn was honoured with the first retrospective at the Royal Academy of a living artist’s work. He held the presidency of numerous artistic societies and his work was recognised by countless awards and honours bestowed by many nations as well as Britain.  Yet, until a major retrospective of his work in various locations in Britain and abroad in 2006, his work had long since ceased to be exhibited widely in Britain (although it was still abroad) and his name was largely unknown. Brangwyn had received no academic training and did not philosophise about art, nor was he a self-publicist. Somewhat a loner, working independently of other artists, he followed his own course and was not connected with any particular school or group. The generally dismissive response of most (but not all) gallery curators and art-schools in Britain to Brangwyn indicated either a lack of knowledge of the artist or an unwillingness to confront their self-manufactured difficulties perceived to arise from the inability neatly to allocate Brangwyn to one or another artistic school or to find some convenient category in which to slot his oeuvre. It is inconceivable that such a state of affairs could have arisen, or subsisted, had not the artistically-myopic House of Lords in 1930 rejected Brangwyn’s magnificent Empire Panels created for the Royal Gallery as a commemoration of the First World War, a decision that must remain one of the most controversial and unpopular in the history of British art. The enthusiastic research of art historian Dr Elizabeth Horner throughout the 1990s and beyond on the life and work of Brangwyn has contributed to a much greater appreciation of Brangwyn’s work across many media, and to renewed interest in his significant achievements as an artist. The result has been that Brangwyn’s work is now more widely exhibited in important venues and frequently appears in the major salerooms.

We are grateful to Dr David Wilson FSA for the above note.

We are grateful to Libby Horner for her assistance. This will appear as G2237 in her forthcoming Catalogue Raisonne of Brangwyn.